Exemplary employees make the difference between a good company and a great one. At RealTruck.com, they make us who we are. They take our company values to heart because company values mirror their personal beliefs. As employees, they illuminate those around them, have an aptitude for leadership, welcome challenges, and enjoy giving back through employee initiatives, community leadership, and enthusiasm for personal and civic development.

RealTruck gives us a unique opportunity to work among a diverse community of individuals that possess a wealth of talent and drive, both here at work and within our communities. This quarter’s RealTruck, Real Leader exemplifies this leadership and drive to a T. Nominated for his advocacy of RealTruck through countless community and workplace endeavors, we congratulate Bill Wixon, our RealTruck Training Manager, who works hard every day to positively brand RealTruck in the community.

Dedicated to building positive brand awareness for RealTruck within our communities, Bill Wixon is our RealTruck, Real Leader for Q3 of 2019. 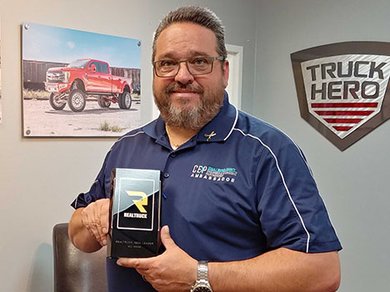 Talking with Bill to prepare for this article was eye opening because there is so much that he does to promote RealTruck within the community. In addition to his daily work at RealTruck, which I’ll get to in a moment, Bill has served as a CEP Ambassador for the Ocala/Marion County Chamber & Economic Partnership for over a year. It’s a type of elected position, and there are only 40 ambassadors within the county. As an ambassador, Bill works to support new CEP business partners as well as events such as ribbon cuttings, ground breakings, Business After Hours networking events, programs for Young Professionals of Ocala and more. As a RealTruck representative, Bill also promotes RealTruck at all of the events and programs that he attends. There are also a number of roles that Bill supports within RealTruck. As Training Manager, he oversees all trainings, including scheduling all vendor and brand training, videotaping and editing all training videos, serving as sole administrator of our learning management system Travitor, and working to strengthen vendor relationships. In other types of training, such as leadership courses, he creates all curricula and organizes a variety of programs to cultivate well-rounded leaders. A few of Bill’s other initiatives include working to support our Culture Team with recent projects like the Lip Sync Battle that raised money for the United Way of Marion County. He also works closely with our parent company, Truck Hero, Inc., to develop Human Resources policies and procedures. When asked what inspires him to take all of this on, he says he is at a point in his life where he’s got a need to serve his community, to get involved and to give back. As far as inspiration for all of the training programs, Bill feels that, as a servant leader, it’s his goal to serve fellow employees as well as his community through positive influence and to help everyone achieve their highest expectations.

How Can Others Get Involved?

If you want to get involved in your community, Bill has some simple advice. “Clean up a park, we have so many here in Marion County. Get involved with the Boys and Girls Club or the United Way. If you’re not learning something new every day, you’re not doing it right.”